Yom Rishon, aka, Sunday, is akin to our Monday. The streets are bustling early in the morning with people heading off to work and even school kids going to cheder or summer camp. The buses get an early start and this morning, so did the Cohen clan. With bus schedules on our ipods and tickets in hand, we were on our way!

JediYeled began his first day at Camp Rammah in Jerusalem. He was very excited but a little nervous about not wanting to be late and miss a thing. GeekAba and JediYeled found there way through to the center of town and then back into the little neighborhood where the camp sits nestled on private park grounds. Yesterday, we all went walking over to the camp wanting to make sure that we could find the mysterious unmarked green gate that would lead to the wondrous camp world for JediYeled. We found the green gate, but the grounds still seemed like a mystery. This morning, JediYeled and GeekAba, with the help of some fellow travelers on bus 22, managed to enter the gates and the wonderful world of camp! By the time we picked him up in the afternoon, JediYeled was exhausted and ready to head back to the apartment – ok, I think he just wanted to finish the game of Monopoly since he did already own Park Place and Boardwalk with two houses on each!

DovLev and I headed out even earlier. Today is Rosh Chodesh Tamuz and the Women of the Wall were gathering for their monthly service at the Kotel and reading of Torah at Robinson’s Arch. But to DovLev’s and my surprise and reminder that it is a small world after all, DovLev’s friend from Morasha, who moved to Colorado, was becoming Bat Mitzvah at the same time at Robinson’s Arch.

Not sure if she was doing this with Women of the Wall or not, DovLev and I headed out on two buses, to the Jaffa Gate. Thinking that this was going to be the only stop in the Old City walls, I led DovLev through the wondrous labyrinth of streets that I have come to know over the years. As the early morning sun was starting to shine on the stones, the city was truly golden and excitement began to fill me as we grew closer to meet with both of these wonderful groups.

DovLev and I approached the security gates entering into the Kotel plaza and there, standing at the side were two women, one of whom was holding the sefer Torah belonging to the Women of the Wall. I asked if they were still in there and if they knew if there was a girl becoming a Bat Mitzvah with them this morning. They did not know, but the group was definitely still at the Kotel. 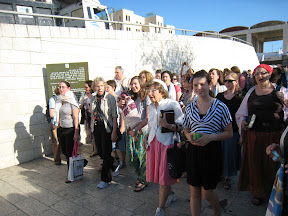 DovLev and I went through security and on the other side of the gate I heard the kol ishot, the voices of women singing together, the voices that cause such a stir in the hearts of those who love them and unfortunately, those who don’t. They were singing: Ozi v’zimrat yah, vayihi-lee, lee’shu’ah – My strength balanced with the song of God will be my salvation (Psalm 118:14 and Exodus 15:2).

Tears welled up in my eyes, I took DovLev’s hand and we joined in the song and march with the Torah and the women and men who joined with us.  Some friends encouraged DovLev to march in front with the Torah for she truly is the next generation of women to raise up her voice in song.

We walked slowly through the streets to the Robinson’s Arch on the south side of the Kotel. As we approached DovLev and I looked down to the Herodian street, completed in 64 CE, and saw our friends already with their service in progress.  We took our leave of the Women of the Wall and continued down to our friends, yet the two services voices mingled magically together. While we were in different parts of the service, the harmony of Jews openly praying together, women and men, was the greatest harmony of all.

DovLev’s friend had no idea that we were coming – thank you Facebook for helping us Mom’s to get together and make this happen. Hearing her daven the service and chant Torah was so wonderful and DovLev was excited to be there to support her friend, thousands of miles away from home.

Jerusalem is magical and paved in gold in not only the stone but also the people and experiences. And this is only yom rishon, the first day of the week!

5 thoughts on “Yom Rishon – Let’s Get Ready to Experience It All!”