It’s been a busy week and this is the first opportunity I’ve had to finally post this from my tiyul to the West Bank/Judea-Samaria.

The issues surrounding the West Bank or Judea/Samaria (depending on what some refer to these areas call it) are very complex. There are no black or white answers to all the questions we have regarding a future Palestinian state. While this tiyul was amazing and eye opening in the location of both Jewish and Palestinian towns as well as the difficult typography that covers the country, many of us still walked away with more questions and insights than when we began the morning.

We were fortunate to meet with top government workers as well as developers for a future Palestinian city. The goal of the tiyul planners was not to insist on one answer over another, rather to provide us with more information to show the complexity of the situation. I did walk away with the clear answer that it’s easy for all of us to be arm chair generals but the reality is, we can’t be, and I have more respect for those who are dealing with the issue on a daily and hourly basis. Below are the notes I took from this tiyul through the West Bank:

Our morning began boarding a bullet proof bus. That right there gave rise to the curious excursion we were about to embark upon. Our goal for the day; to understand the building by both sides and the land in an effort to create the borders of a two state solution. What is interesting to note is that it is believed that if it is not completed in 2-3 years, then it may never get done as both sides keep positioning themselves in certain areas requiring map drawers to have to return to the drawing board, so to say.

To what extent are our issues driven by the reading of the other side? There are two dynamics: one group of Israelis who are able to sit and enjoy food together. The other who say, there will be those who will shoot us when we walk together.

On one hand, there is a narrative that says that all of this land belongs to Jews. But on the other, there is the realization that we have to find a way to live together in peace…if possible.

And more thoughts and hands: The stakes are high and there are two thoughts: it is only Arabs who can give us the recognition that will give us peace, but there is also  a requirement to defend ourselves. 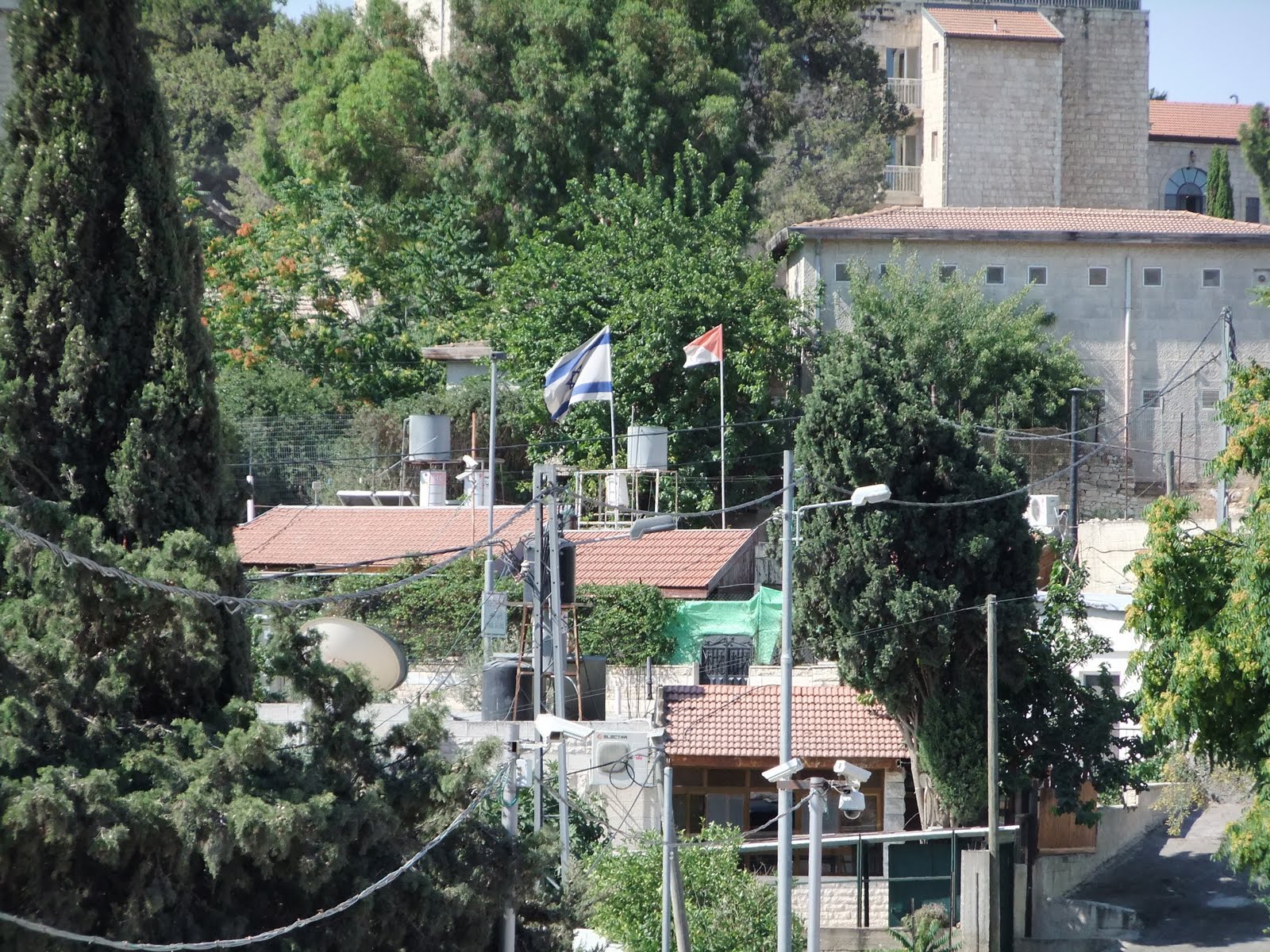 As we drive through the streets of East Jerusalem, specifically, the area of Shekh Jarrah, a clear Palestinian neighborhood, we find Haredi Jews who lay claim to a small tomb of Shimon HaTzadik, that will require map drawers, such as Danny Siedemann, a lawyer and leader in the Peace camp in Israel, to redefine future borders.

What is interesting about the tomb of Shimon HaTzadik is that this tomb was closed 364 days out of the year. No one visited it or made a fuss over it except on Chol Hamoed Pesach, when the community had a carnival that included Jews and Arabs alike. However, ten years ago, as talks began regarding Jerusalem and peace, the Haredi Jews began to make pilgrimage to this place and ensuring that it would be open 24/7 for all to visit and pray.

Later, from Mt. Scopus, looking down the sharp decline into the Jordan River Valley, we look upon Maalei Adumim. This was th 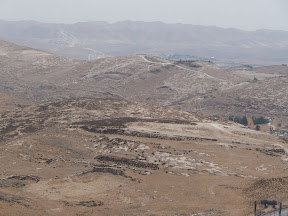 e first city to be built in Judea/Summaria and now is home to over 20,000 people. Yet, it is right in the middle of where borders can be drawn, and again, another area in which safe travel has to be considered for Israelis into Jerusalem and around the country.

Our next meeting, after traveling through East Jerusalem and now into the heart of the West Bank, to the town of Beit Aryeh, was with Colonel Danny Terza. Beit Aryeh is a beautiful settlement with 750 families. Placed here as a security town as it looks down into Tel Aviv and especially with Ben Gurion Airpots runways in clear sight. Unlike those at the tomb of Shimon HaTzadik, those who have settled here are not religious, but live here to ensure the safety of the land of Israel. When sitting in this town, it looks like any other Israeli town with it’s playgrounds, schools and community center where the kids were playing at the pool and getting ready for tiyul.

Colonel Danny Terza was responsible for creating the route for the security fence, which must be noted, that only 5% of the fence is actually a wall that we see on TV. Most of the fence is literally just that, a wire fence.

Terza shared that in 1947, there were not many  Arabs. At that time, as we know from history, the UN created a mandate for a two state solution, one for the Arabs and another for the Jews. But Arabs did not want this and Israel was alone created and the following day after Israel declared Independence, the surrounding Arab nations tried to destroy her. In 1967, they tried again to destroy Israel. The land taken in that war was not annexed to Israel because Israel truly thought that there would be peace. But, as with any battle, the Palestinians have another story. They do not see that Jews have the right to a country for as Jews, they are a religion, not a nation, therefore, why should Jews have a state. No other religion has a state.

Most Arabs think there will come a day that Jews will simply go away. But others say let’s help get them out. And the 1967 war, the Arabs insisted that they believed Israel was only trying to enlarge the borders. (keep in mind, the Israelis did not start the war) What Israel calls “terror attacks” against Israel, Palestinians  call “resistance”, part of their struggle against occupation.

With two narratives: one’s belief and one’s story – it makes it very hard to reconcile the two.

But there were times that Israel was so close to peace. 1993, Oslo; 1995, more moves. Even in summer 2000, there was an offer to the Palestinians for almost everything; 94% of territories including the Temple Mount. Ehud Barak said to Arafat at that time, the only thing that is needed by him is for him to sign the  agreement that this is the end the conflict. But Arafat walked away saying that he just couldn’t sign that.

As a side note: there are two terms that are used in describing towns in the West Bank: Settlement: the government agrees to have a settlement in a particular area of the West Bank, especially for security reasons. Outpost: these are caravans of trailers and temporary facilities where people are living on private Palestinian land that the settlers did not purchase. 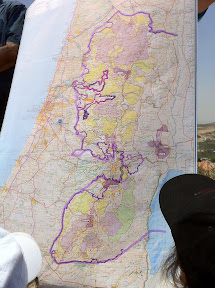 Terza went on to explain that creating the lines is not just about creating lines as so one people can live here and the other live there – the land is so small that you still have to live together. There are issues that have to be considered:  issues of sewage, water, roads (such as bridges that connect Palestinian areas to Palestinian areas and Israeli to Israeli.) it is so challenging that Americans cannot just come in and make these decisions, as much as many Americans and other countries have tried to do. One has to walk all of the land and talk to all those who are living in it. There must be talks about security and borders, borders and environment, everything must come together.

Since the fence was completed, only 14 people have been killed. Before the fence, over 1600 in terrorist attacks in less than two years.

Next stop, Rawabi, (outside Ramalah) Palestinian development in what is called area A, that will absolutely go to Palestinians. (Note: when looking at a map of the West Bank, it is divided into sections, A, B and C. Area A is under Palestinian control, while Area C is under full Israeli control. Areas B is where Israel is in security control while Palestinians maintain civilian control.

Rawabi is an active building site with city plans that take into consideration everything from infrastructure to environmental concerns. The developers are hoping to have 1000 units built in next couple of years. Yet, there are many issues that they need to overcome, including the need to build a road through Area B to help connect two other areas so trucks and construction supplies can more easily be brought in. And the recent Boycott Bill passed by the K’nesset that prevents companies in Israel to sign the agreement from Rawabi that they will not do business with Israeli companies that are in the West Bank.  The developers are hoping to buy supplies from Israeli companies which could bring in millions of dollars into the Israeli economy.

In meeting with Bashar El Masri, the developer for this project, and a wealthy Palestinian, we heard him and his staff speak eloquently about their hopes for building a future for their people. Their plans are to transform this area from in the distance one sees Ramalah, into a city where Palestinians can “Live, Work, and Grow.” It is their hope, like that of so many youth in the region, to create a place where they are proud to live peacefully. Masri said that it is his hope and belief that if they are able to build such a prosperous and successful city, one in which the people feel proud to live, that this may help bring peace to the region. That when there is hope, there is peace. He said, ‘is it possible that there may still be attacks against Israel – yes, but at least we need to try to do something to try and make a peaceful place for all to live.’

What did this day for me? While I did not come back feeling that the situation was now so clear, I can say, the perspectives it left me with were important.

6 thoughts on “A Day in the West Bank”